If you have a fancy for history and weekend escapes, head North-West to Sydney’s historical Windsor and let her spin her ‘Old’ Sunday-story for you…

Windsor is a lazy 60km’s out of the city and is situated alongside the Hawkesbury River.   As the third oldest (British) colonised town in Australia, Windsor was once essential to the survival of a starving settlement colony.  This was thanks to her fertile farming land and flowing river – which allowed for the growth and transportation of agricultural essentials throughout Sydney.

There is an old court-house where you can learn stories about convicts who were tried and hanged on the grounds.  And for those with and eerie sense of Windsor’s lingering souls, there are lantern-lit ghost tours in the evenings that will tease your supernatural sensibilities.

You’ll find all the British essentials have long since been stamped upon Windsor’s soil, including – The old Church and schoolyard (St Matthews) and the ever important local pub -The Macquarie Arms.

‘The Arms’ (as she is affectionately known by locals) is the oldest pub in the whole of Australia that is still being used for its original purpose.  The sunken steps at her entrance pay tribute to all who have previously walked through her entrance and the killer menu is a testament to her 200 years of satiating hungry patrons.

Enjoy the mix of the old and the new, by chilling to modern beats in the park (opposite the pub).

Soak the soothing country vibe into your bones as you amble through the mall, where market stalls play host to the creative styling’s of local artists and offer tribute to our favourite pop-culture icons.  Admire hand crafted goods, sample home-made foods and sip coffee in one of the numerous country coffee houses. 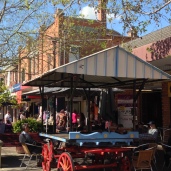 Leave your mark on the town with the toss of a coin into the 1800’s styled paddle-wheel (turned) wishing-well and say farewell with a gentle walk along the peaceful river front.

Windsor is easy to get to by car or train and offers a delightful Sunday escape!

For directions and helpful information, follow the links below.

Connect to sixdgreez on Social